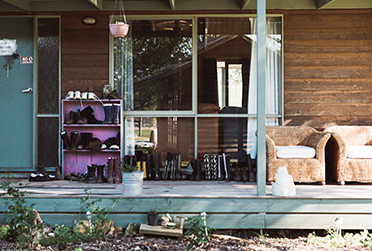 Sally [not her real name] has been up since 6:15am, genuinely relishing the routines and structures of life as a resident of the Maryknoll Therapeutic Community (TC). “Sometimes I think I am on an episode of McLeod’s Daughters, she says. “I have been cutting goats’ nails and I actually know how to flip a goat. I am feeling incredible and I have never felt so protected.”

It is less than a week before she will leave the TC after 13 months as a resident. Sally’s stint at Maryknoll makes her the longest running current resident in the TC. She arrived last winter in the grips of ice addiction after months in self-imposed isolation. Sally remembers spending days staring at her walls, hearing voices. “I was just so unwell,” she says. “I thought I would go stir crazy and not last three months but here I am,” she says.

Sally, 29, is sharp, articulate and sounds like a woman with a professional background. Then came the ice. It was never heroin for Sally. Some big reasons why – she has a phobia of needles and both of her parents have been longtime heroin addicts.

When Sally first arrived at Maryknoll she remembers she was a person who could always justify everything. Slowly, those habits began to get stripped back. “What really helps here is having people around you who tell you like it is, uncomfortable things that you need to hear.”

Sally has been recently reading Paolo Coelho’s novel The Zahir, about the search for the self, relating strongly to the main character’s journey to release the parts of him that he no longer needs. “It’s about deciding what you want to hold on to, what you want to release,” she says. “When I first arrived here, I went to bed early at 8:30pm, hiding, and as I let go of more of the past pain [being an overweight kid, her loving but absent parents and their addictions], there was room in my life for other things, for reading, for working out in the gym, for friendship. The most important thing for me was realising that I don’t have to do it alone.”

During the past 13 months at Maryknoll, Sally has seen fellow residents come and go, and return, struggling with their own recoveries. “I have been able to be there for them, to hold them. The community here is about people who are there for you unconditionally. They have your back,” she says. I love seeing other people heal, having those breakthrough moments, seeing those changes, the transformation, it captures my soul.”

When fellow clients have behavioural episodes and struggle with the program, Sally now is able to empathise with the behavior, relate to the experience and offer support. “Everyone is vulnerable in life so it is about being able to trust and love people. We are all learning from each other.”

Sally has just a handful of days to go before she moves on to the next stage in her recovery, the Integration House. As well as continuing her rehabilitation program, she is starting volunteer work. She knows it is going to be a major transition but she is feeling good. “Really, I feel like I have been reborn.”