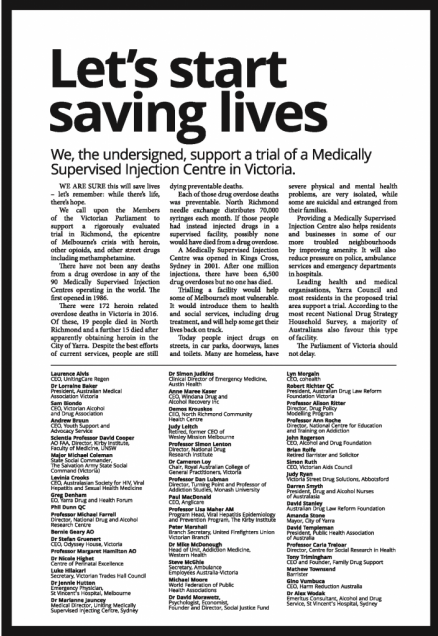 Windana Drug and Alcohol Recovery Inc CEO Anne-Maree Kaser has joined 45 leaders from drug & alcohol recovery, social welfare, justice, medical and health organisations in a petition to the Victorian Parliament to support Medically Supervised Injection Centres in Victoria and to support a rigorously evaluated trial in Richmond, a centre of the city’s crisis with heroin, opioids and methamphetamines. The petition, published in the Herald Sun on 9 February 2017 has the backing of organisations including Austin Health, Victorian Alcohol and Drug Association, Drug and Alcohol Nurses of Australia and the Salvation Army State Social Command.

The petition states that in 2016, there were 172 heroin-related deaths in Victoria, 19 deaths in North Richmond and a further 15 deaths after apparently obtaining heroin in the Richmond district. In Sydney, the Kings Cross Medically Supervised Injection Centre has seen one million injections administered since 2001. There have been 6500 overdoses, no one has died. The petition is aimed to offer support to some of the State’s most vulnerable and is also backed by Yarra Council, local residents and the majority of recipients in a recent National Drug Strategy Household Survey. States the petition: “We are sure this will save lives – let’s remember: where there is life, there’s hope.”